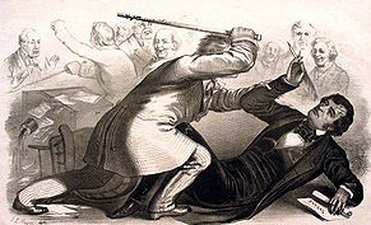 8-U4.2.1-Compare and contrast the social and economic systems of the Northeast and the South with respect to geography, climate, the development of agriculture, industry, the labor force, transportation, immigration, race relations, and class relations.
8-U5.1.3-Describe the competing views of Calhoun, Webster, and Clay on the nature of the union among the states.
8-U5.1.4-Describe how the Missouri Compromise, the Wilmot Proviso, the Compromise of 1850, the Kansas-Nebraska Act, the Dred Scott Decision, and changes in the party system increased sectional tensions.
8-U5.1.6-Describe how major issues debated at the Constitutional Convention such as disagreements over the distribution of political power, rights of individuals, rights of states, election of the executive, and slavery help explain the Civil War.

With the issues facing the United States from 1789-1860, do you feel the Civil War was inevitable?

Building and Refuting an Argument Rubric